At OAK NM we remain open-minded about new PED Secretary Kurt Steinhaus. But, if this is in fact what he just told the LESC (the education-oriented arm of the Legislature) he is “out to lunch.” 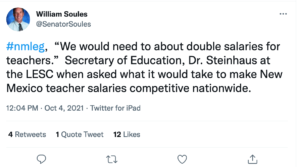 According to data from none other than the NEA, New Mexico’s teacher pay is somewhat lower than average (ranked 32nd overall). Keep in mind that New Mexico has a low cost of living relative to other states. Doubling New Mexico’s average teacher salary woulndn’t just make our teacher pay “competitive.” It would blow #1 New York out of the water.

Does Steinhaus REALLY not know these basic statistics? Hopefully he has some more cost-effective and creative ways to getting New Mexico out of dead-last in education.

One reply on “Double teacher salaries???”

[…] race theory. Additionally, PED Secretary Kurt Steinhaus claimed in testimony recently that for New Mexico teacher salaries to be competitive they’d have to DOUBLE. We question […]